There are two types of men in this world: those who turn their noses up at the idea of squeezing themselves into a pair of leggings and those who have actually tried it. Men in the latter camp understand the additional level of comfort, practicality, functionality and performance compression legwear can bring to the table. The trouble is, these garments have never really been designed with men front and centre… until now.

Matador is an innovative men’s athleisure brand primarily known for its men’s leggings and compression shorts specifically designed for the male anatomy. They’re ideal for hitting the squat rack, perfecting yoga poses, running errands at the mall, or Sunday brunch. For men already converted to the way of the legging, this specialist option is the obvious choice, and for anyone on the fence, it’s the perfect introduction to a comfier, easier and quite often jazzier (more on that later) way of life.

So, what sets Matador Meggings apart from the big industry players already making men’s tights? Well, quite a lot as it happens. Keep scrolling to find out what you’re missing and why it’s high time you let leggings into your life. 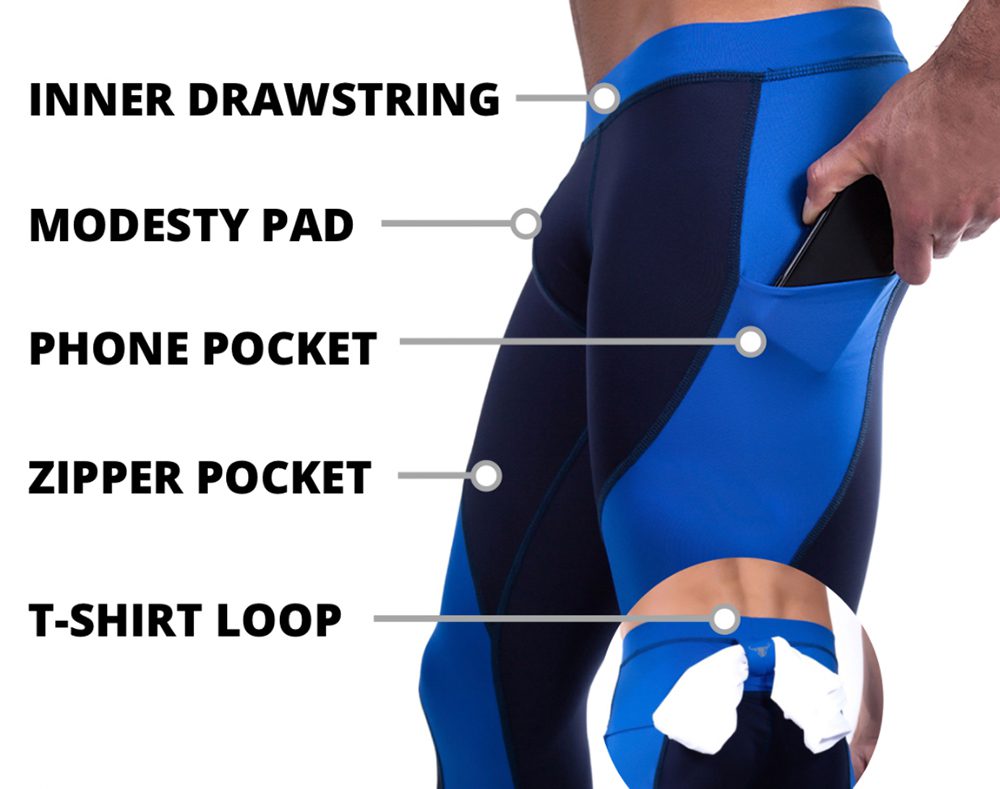 The main differentiating factor of Matadors is the groin department. Each pair has a soft moulded crotch cup concealing the VPL, visible penis line. This thin layer of modesty pad gives men a perfectly-rounded superhero crotch so you won’t have to wear shorts over your leggings, which is the cardinal fashion crime. Why wear tightfitting clothing only to make it less functional by wearing baggy shorts over them?

Since most leggings on the market are designed as an undergarment to be worn under shorts, they don’t come with pockets. Unlike most common leggings, the Matadors come with fully functional pockets for your on-the-go essentials. There’s a concealed zipper pocket for your valuables such as keys, card, wallet. Then there’s another open pocket for your phone, which is strategically placed on the outer thigh to ensure it is within reach but doesn’t get in the way of your exercise. And if that was not enough, there is even a towel or t-shirt loop at the back, so you don’t need to carry them while you’re training. These are men’s leggings on steroids!

All that being said, it would be a mistake to pigeon-hole Matador to only men’s leggings. Yes, that’s their hero product but they have an awesome range of compression shorts, bike gear for cyclists, and a cool top collection with prints matching their meggings. 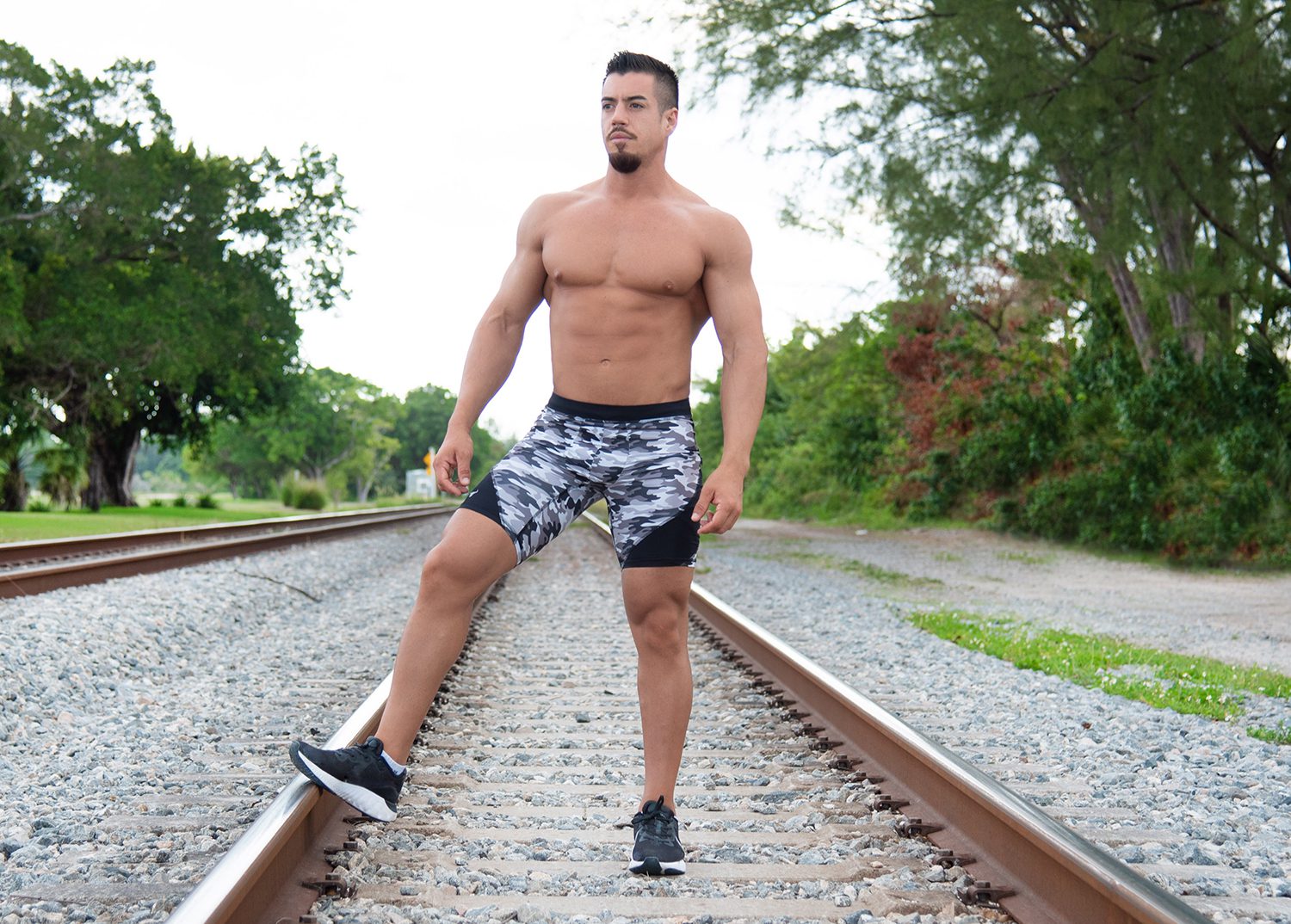 It’s not true to say that there are no brands out there making male tights. In fact, there are loads. However, they’re all designed as an undergarment. They will give you some compression, but dare to wear a pair without shorts over the top and you’ll be leaving little to the imagination.

Plenty of the big names in sportswear, such as Nike, Lululemon and Adidas, have been making thighs for years. But none of them is considered a standalone garment.

This is where Matador’s unique selling point comes into play. When they say these are leggings designed around the male anatomy they aren’t kidding. Built into the crotch is a padded cup, not dissimilar to what one might expect to find in a padded bra. The goal is to eliminate what Valentine jokingly refers to as the ‘VPL’, or ‘visible penis line’, meaning the outline of a man’s junk when he parades around in a pair of lesser leggings. 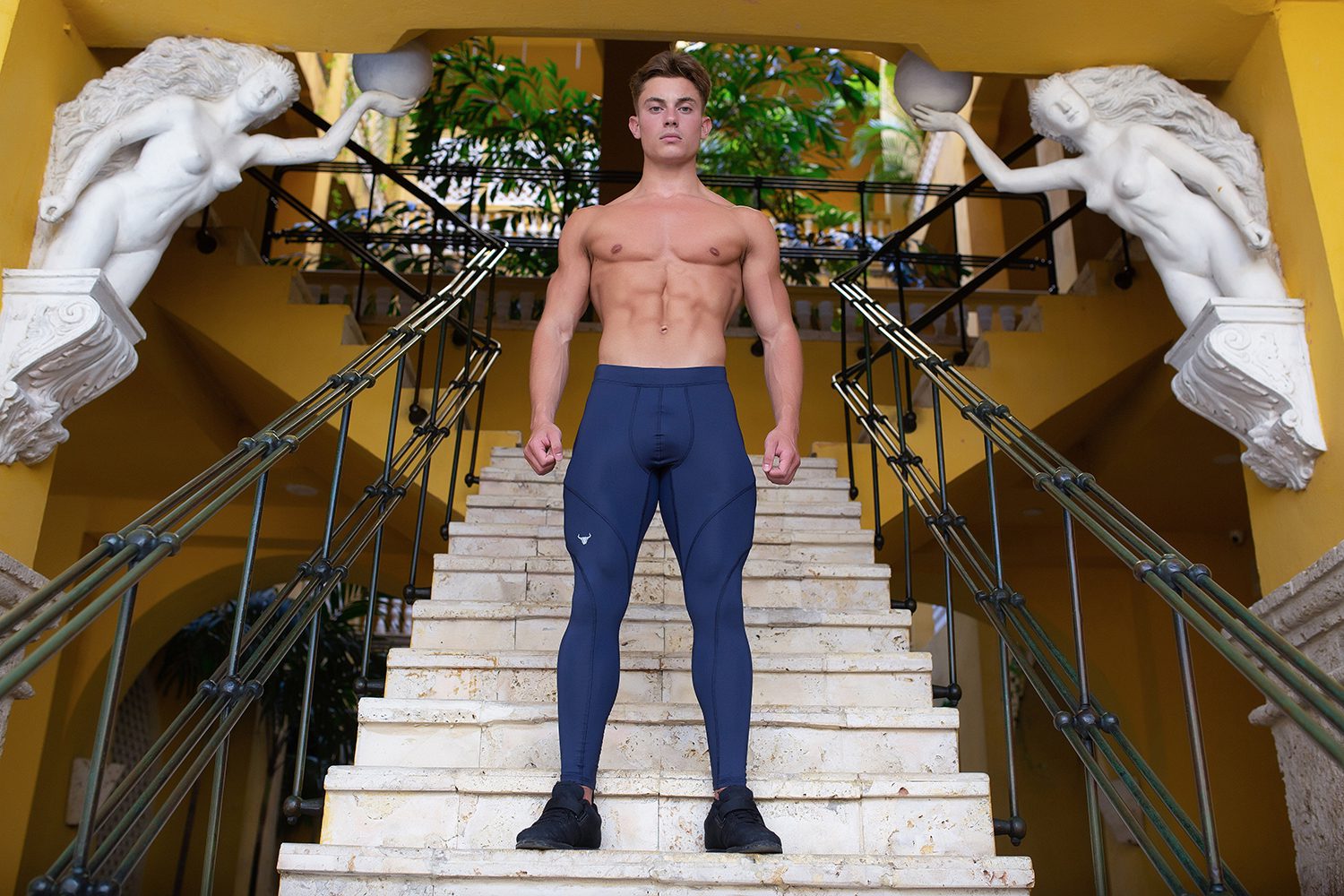 The VPL is one of the key things that puts men off leggings, but Matador’s purpose-build cup ensures a smooth, superhero-esque outline every time, keeping your modesty intact and your tackle unexposed to anyone standing nearby when you’re using the adductor machine.

Then there’s Matador’s undeniable wow factor. Sure, there are plenty of subtle block-colour options for those who like to keep things low key, but statement makers, party animals and extroverts are more than well catered for with the dazzling selection of attention-grabbing prints and patterns. It’s these bold and bright leggings that have made Matador such a hit with the festival crowd, fun lovers and out-and-proud men looking to turn some heads. 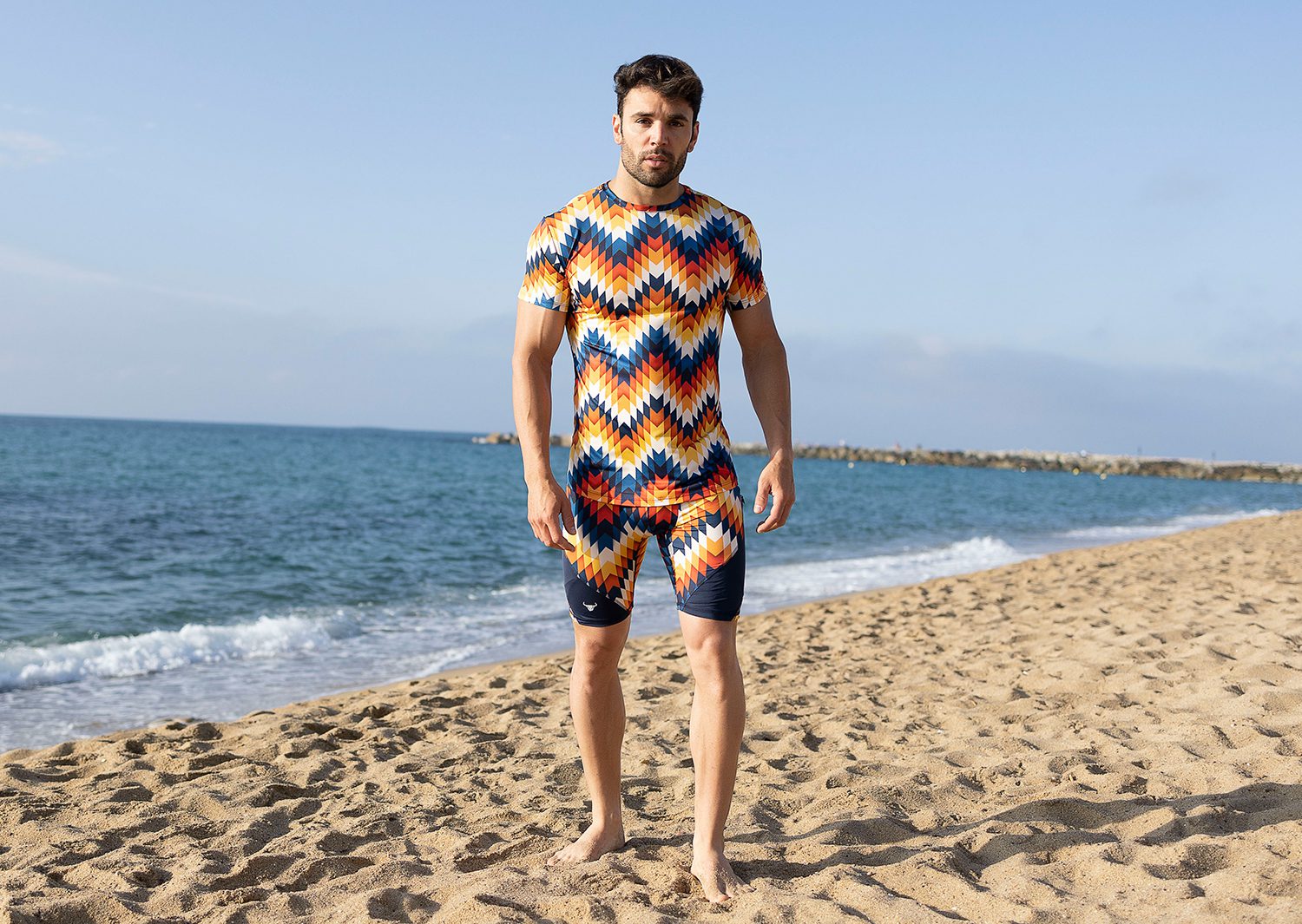 The Birth Of Matador

If you’ve ever found yourself frustrated at the lack of athleisure legwear options for men, then you already have something in common with Matador founder Valentine Aseyo. In a yoga class with 20 women, Valentine noticed that not only was he the only man, he was also the only person in the room not wearing a pair of leggings. But why? After all, these stretchy, form-hugging pants are the perfect legwear for the job. The trouble was that the product he wanted – a male-specific legging, made from high-performance materials and designed around the male physique – simply didn’t exist. Due to the nature of spandex, leggings either expose too much male genitalia or give a flat groin, which is far from flattering. So he decided to create it himself.

Fast forward to today, Valentine’s brand, Matador Meggings, is the foremost purveyor of men’s leggings and compression shorts. The products are known for their padded modesty cups, male-specific fit, and clever details like the integrated T-shirt loop that make life in and out of the gym just that little bit easier. They’re also famous for their bold, eye-catching prints and patterns, which have made them popular with festival goers and the like, but unlike run-of-the-mill ‘novelty’ leggings, these ones are made from technical high-performance fabrics. 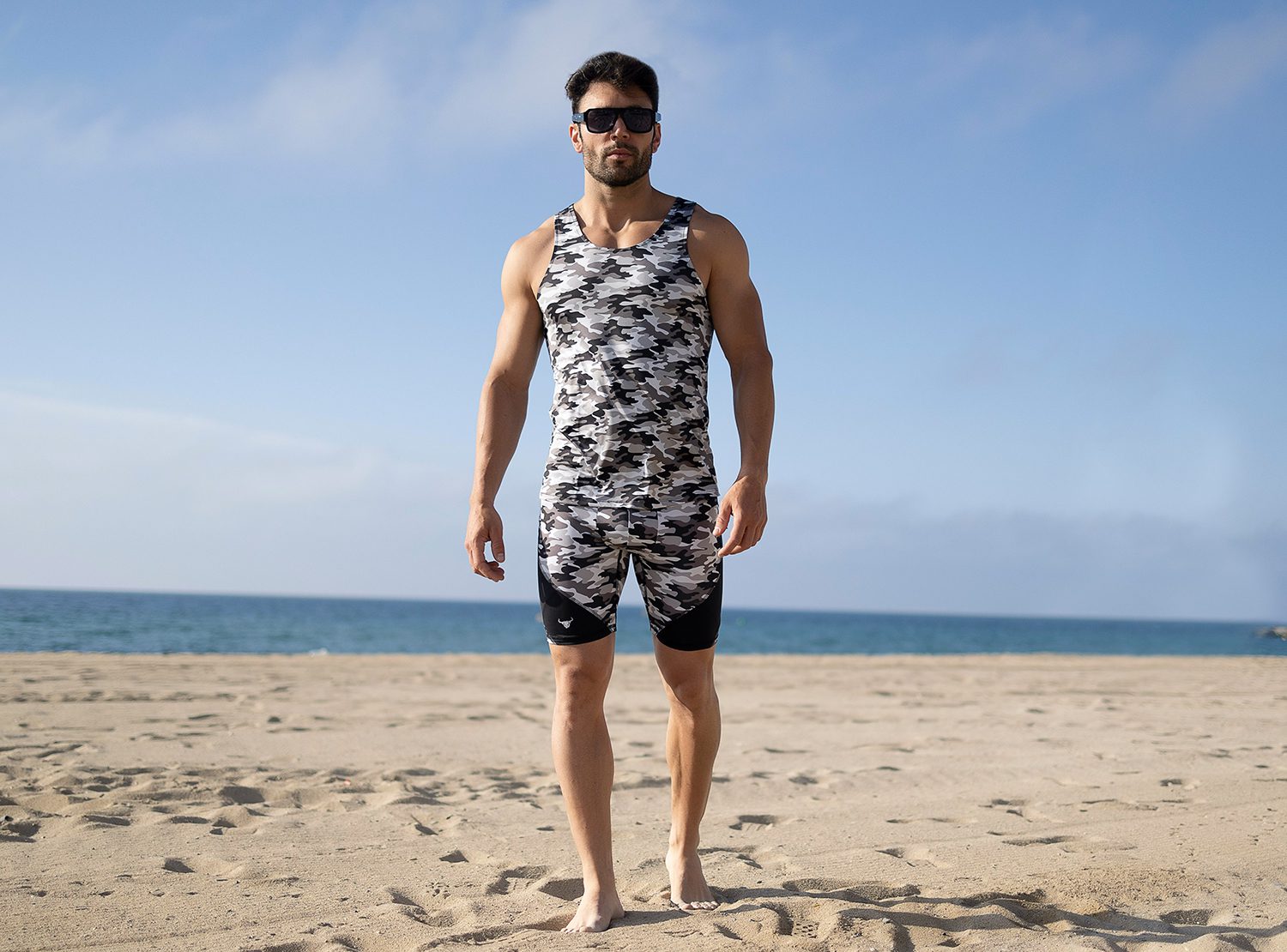 Somewhere along the line, society decided that leggings were for women, not for men even though throughout centuries men wore leggings way before women were allowed to wear anything other than a skirt. For decades, this view has deprived men of one of the most comfortable, practical day-to-day legwear options out there. We think it’s time for that to change, and Matador is playing a key role in breaking societal norms, enlightening men to the benefits of compression legwear and ultimately democratising leggings.

Leggings offer more protection than shorts, greater range of motion than regular trousers and are stretchier and more comfortable than even the absolute best of sweatpants. Yes, they’re great for the gym, running and yoga, but they’re more than just athletic apparel, as millions of women all over the world have been showing us since the beginning of the athleisure boom. 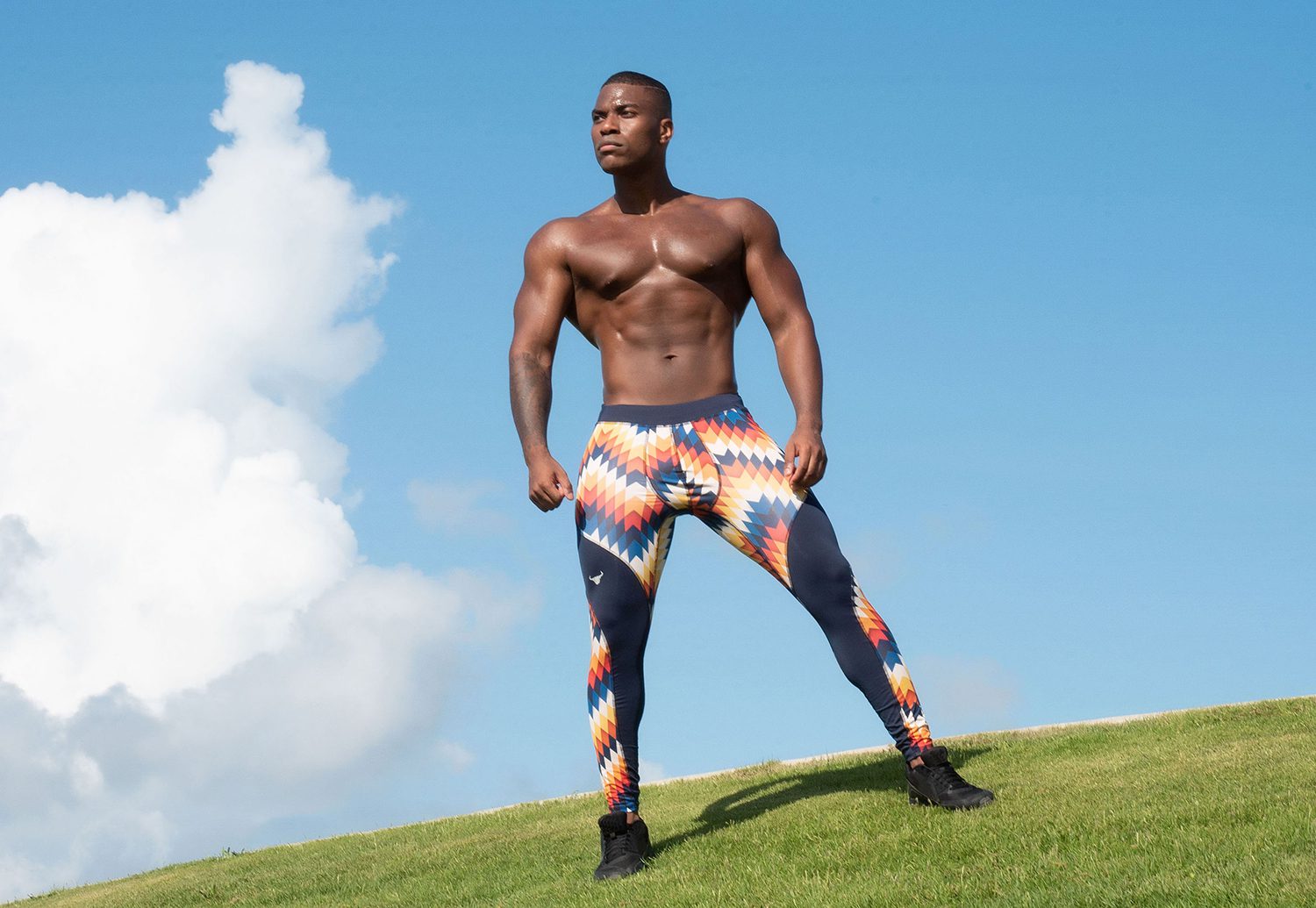 There’s no shortage of options to choose from on the Matador Meggings site, but we’ve whittled it down to a few of our favourite key styles. Here’s Ape’s pick of the best Matador products to start your legging collection today. 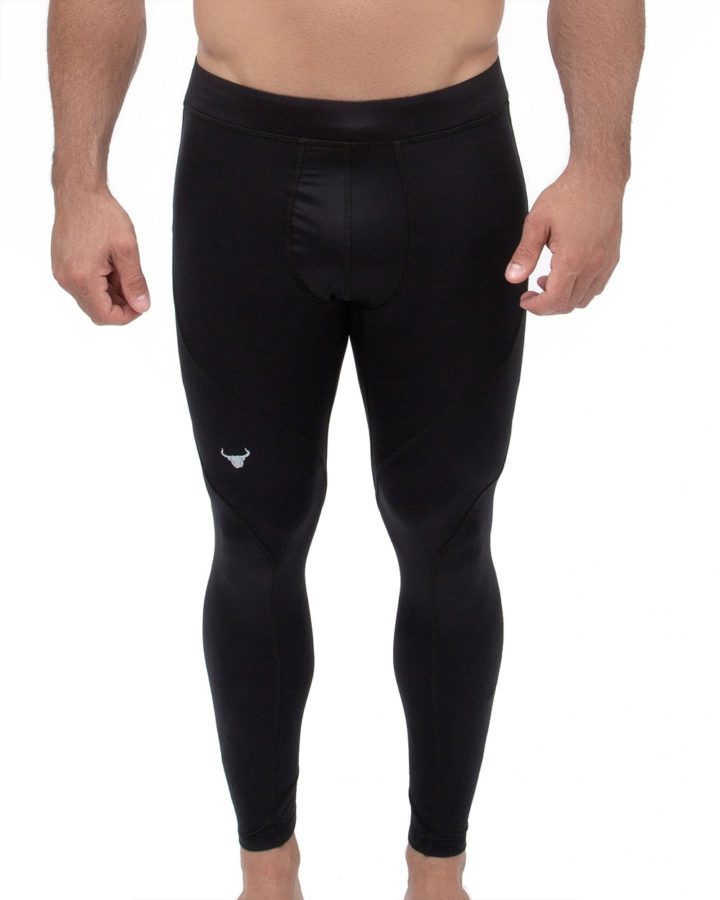 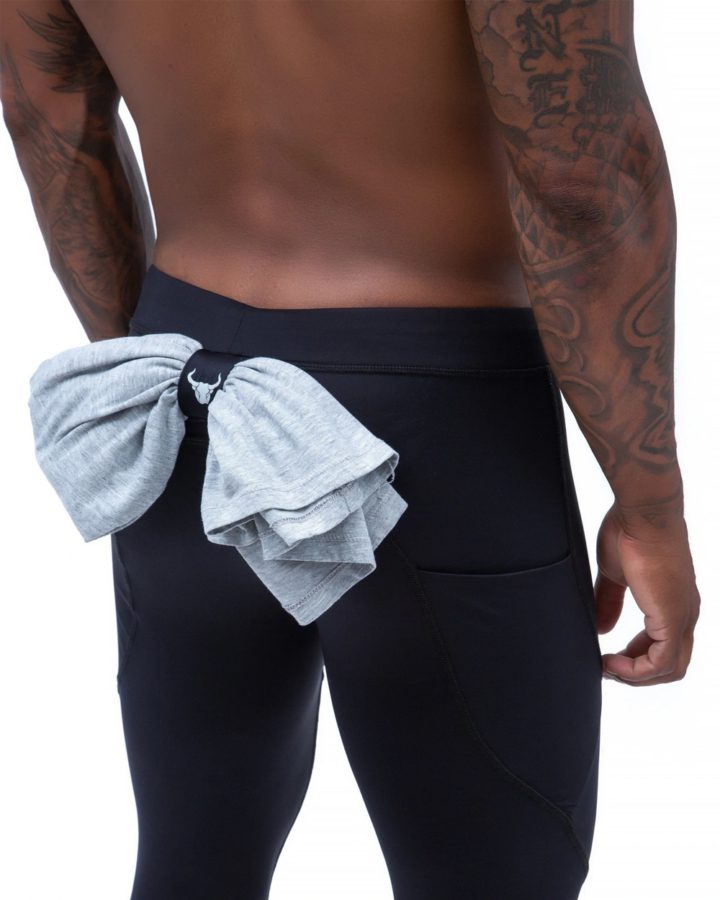 Maybe it’s your first time dabbling in the world of leggings, or perhaps you like to keep a low profile. Either way, you can’t go wrong with plain black when it comes to keeping things classic and subtle.

Simple and understated, these leggings would be perfect for everyday use and will combine well with other athleisure pieces like hoodies, sneakers and T-shirts. Plus, they still feature all the same details as Matador’s rowdier designs, including the T-shirt loop, pockets and trademark crotch cup. 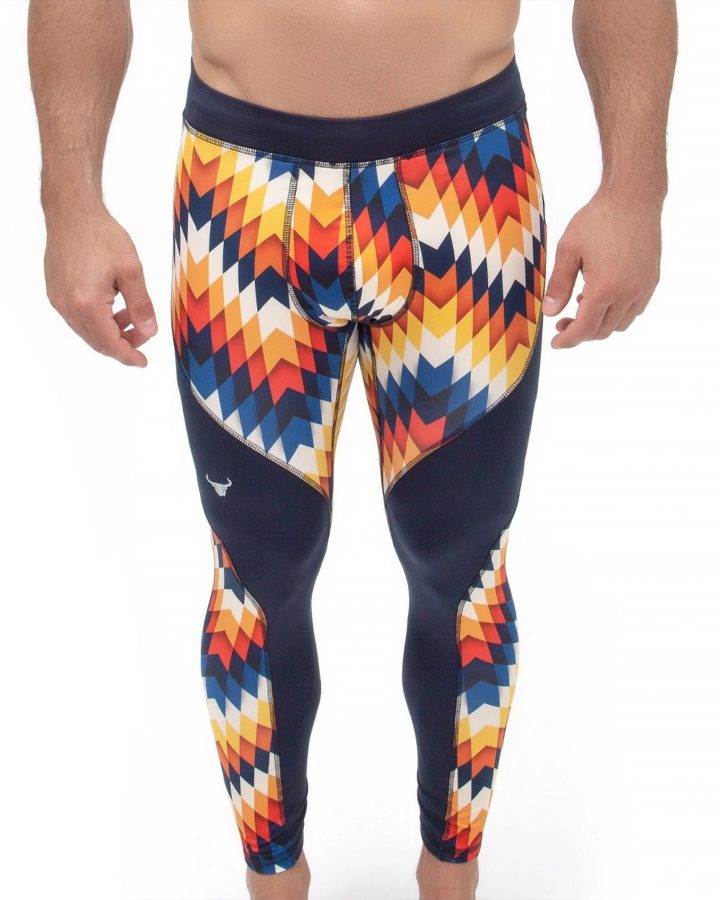 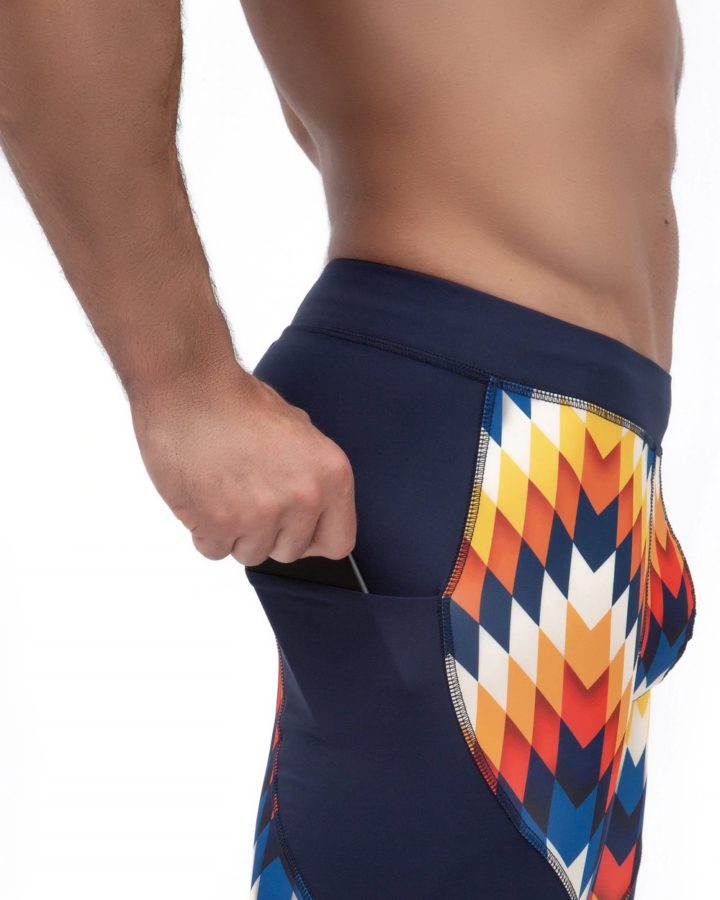 Bold and bright, these multicoloured leggings are one of Matador’s best-selling styles. The pattern is colourful and eye-catching without being obnoxious and they’re perfect for bringing a dose of personality to otherwise understated athletic outfits. 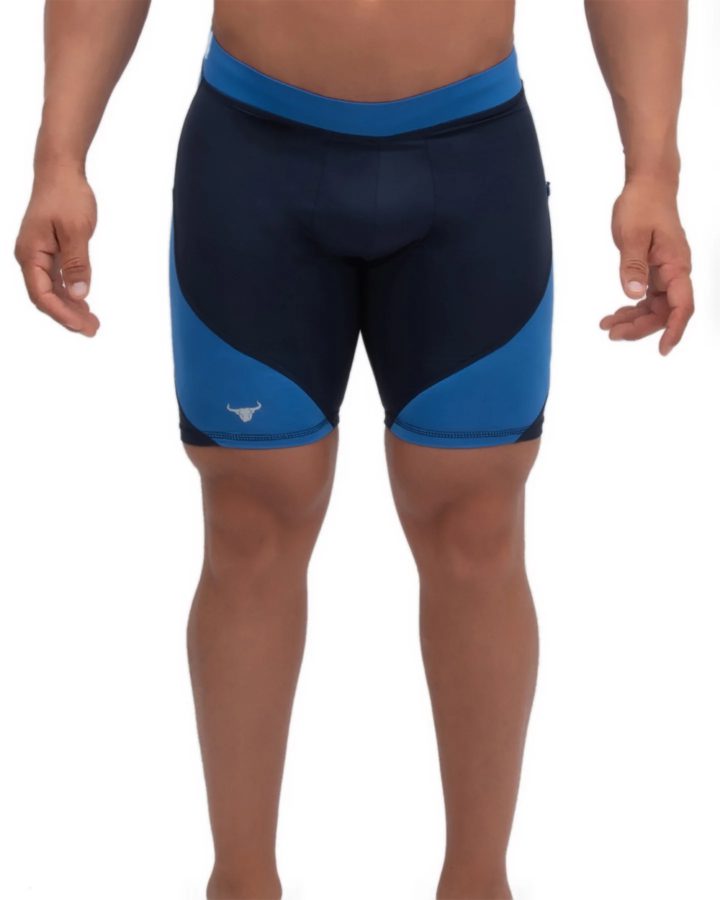 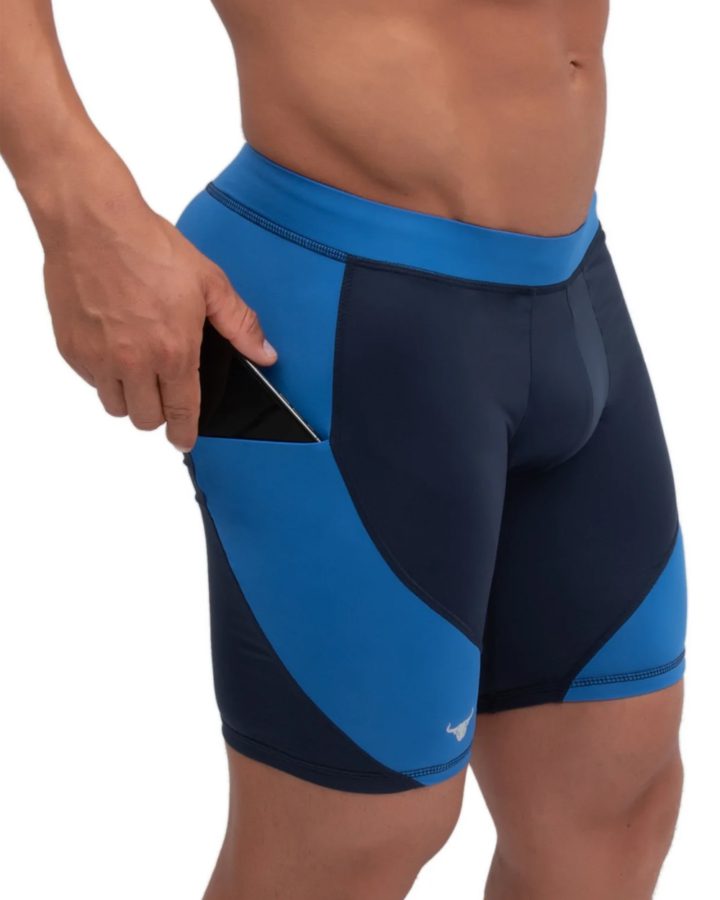 With Matador’s signature bull horns wrapping their way around the sides, these compression shorts are great for an understated look while running, lifting, stretching or perfecting your side plank. We love the athletic appearance and think the contrast between navy and blue works nicely. 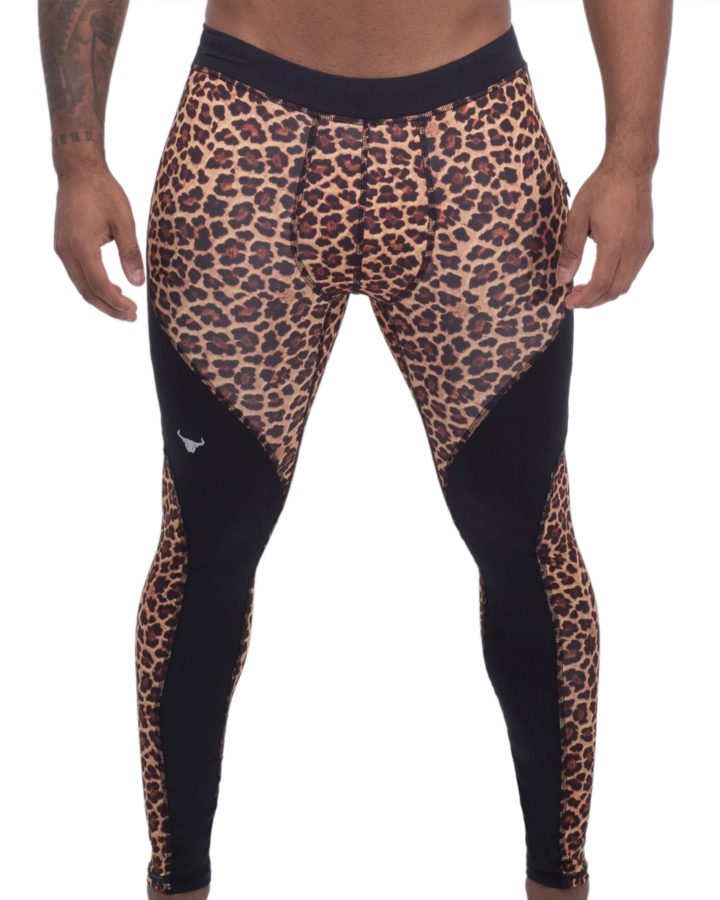 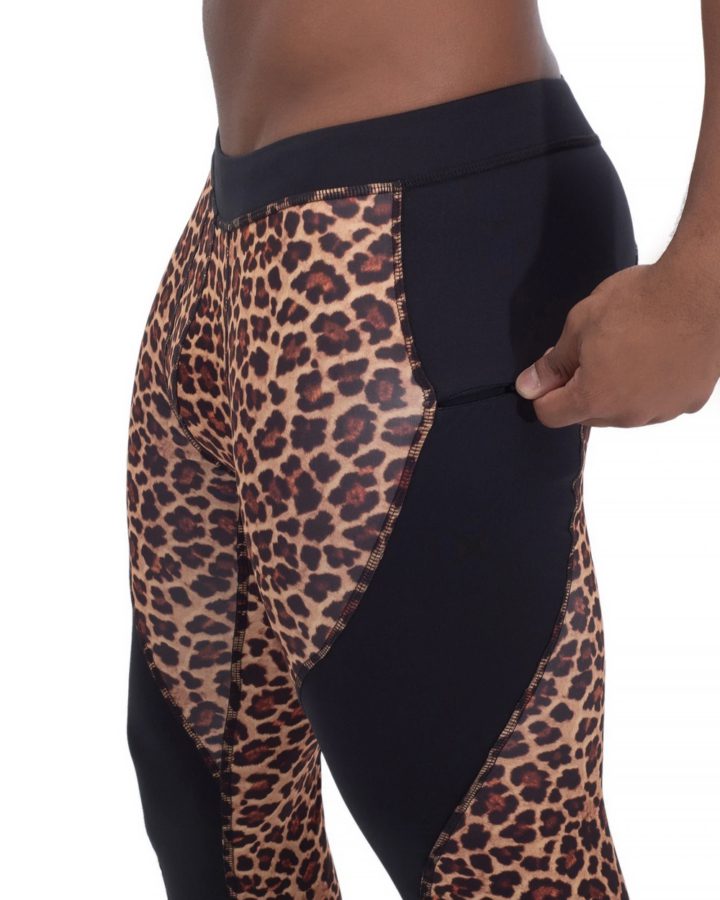 If you’re going to make a statement with your leggings, you might as well go the whole hog… or the whole leopard in this case. Perfect for festival season, Pride, or just to jazz up your workouts, these animal-print leggings are loud, proud and perfect for turning heads.

A paid partnership with Matador Meggings – words and opinion Ape’s own.